Download this Letter to the Editor about Festa Italia

August 26. 2022.  The 89th  Festa Italia, celebrating Monterey’s Italian heritage and cultural traditions, will be held on September 9-11, 2022.  Join us for this special festival honoring the local fishermen of Monterey, both past and present.

This popular family friendly free event shares the sights, sounds, food and culture that make the Italian experience so special. It is a celebrated festival each year drawing locals and visitors from the Bay Area and beyond. It features three days of authentic Italian cuisine, great music, dancing, fun and friendship. The delicious flavors of Italy are enjoyed by attendees with tasty food offerings (for purchase) including Calamari, Steak and Sausage Sandwiches, Pasta, Arancini, Cannoli, Cookies and more, as well as wine, beer, sodas and water. There is also an array of Italian and Festa Italia-themed merchandise as well as vendors selling crafts and more. There will also be a table of information from three local historic organizations, including the International Catholic Federation, Italian Heritage Society of the Monterey Peninsula and Friends of Isola delle Femmine.

The first Festa Italia in Monterey was celebrated in 1933 when a statue of Santa Rosalia, the patron saint of Sicilian fishermen, was donated to the San Carlos Cathedral. Sicilian fishermen would pray to their patron saint for a safe journey and bountiful harvest. It is important that we remember our cultural heritage and pass it on to future generations. Festa Italia celebrates these traditions and keeps our stories, old and new, alive to ensure that our heritage is never lost. Everyone is welcome to join in at this fun, festive event! 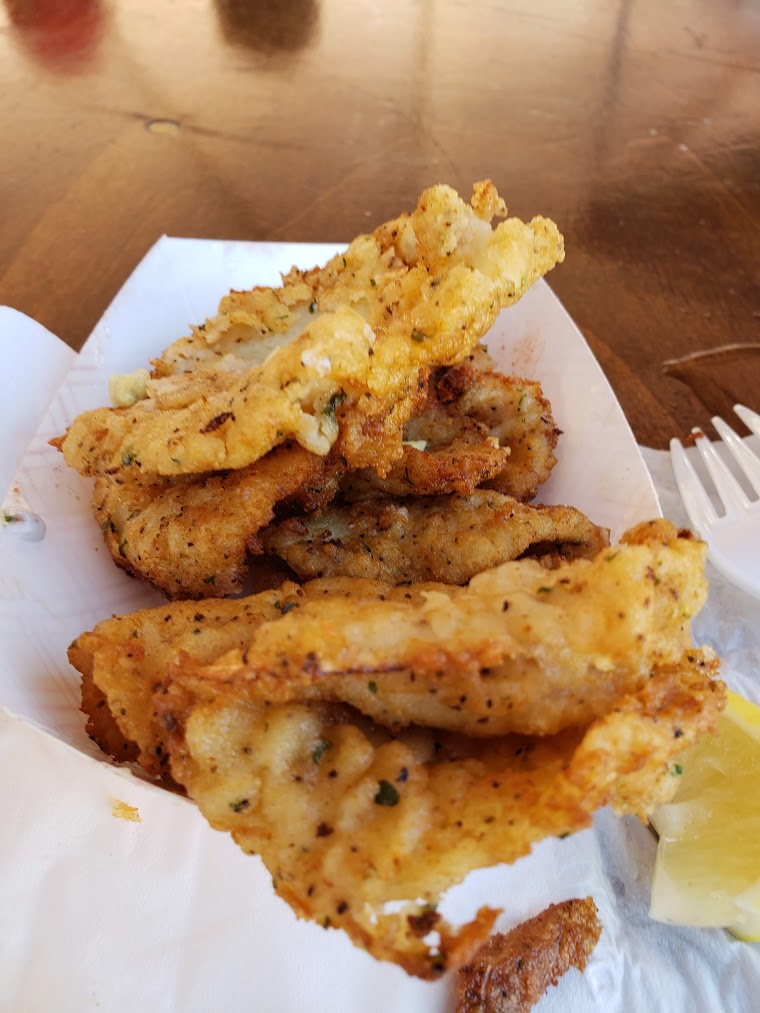 Opening Ceremonies and Procession to Old Fisherman’s Wharf at 11:30 am for the traditional blessing of the fishing fleet followed by entertainment and all event activities through 9 pm. Vitalba Gammicchia, Vice Consul Commerce, will be on site representing the Consulate General of Italy in San Francisco. 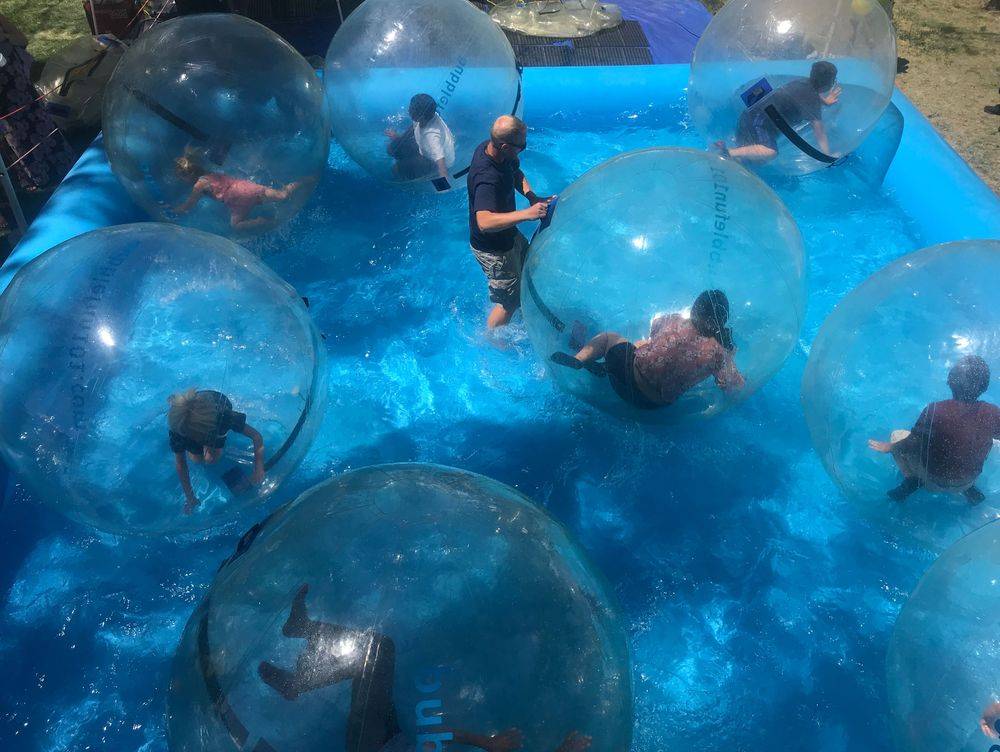 11:30am -12 Noon Opening Ceremonies
Opening Ceremonies and Procession to Old Fisherman’s Wharf at 11:30 am for the traditional blessing of the fishing fleet followed by entertainment and all event activities through 9 pm. Vitalba Gammicchia, Vice Consul Commerce, will be on site representing the Consulate General of Italy in San Francisco.

Fun for the whole family!

This amazing bungee trampoline flings you 25 feet into the air as you jump and flip on a trampoline. The Euro Bungee air power jump gives you the sensation of being completely weightless. Experience the adrenaline rush of a bungee jump as you perform gravity-defying moves at your own speed/pace. You control the amount of fun you can have. Weight limit: 30 lbs - 200 lbs.

These Water Balls are the most innovative and fun inflatable you will find. Just climb inside the 6-foot water ball, and they will fill it with air and zip it up. Next you will enter the pool where you can walk, jump, roll, and float on the water. You don't want to miss this one-of-a-kind experience. Bubble Fun Water Balls are designed for all ages to enjoy. There is no age limit for this activity. Weight limit: 175 lbs.

About Mike Marotta and Friends will include Dennis Murphy on bass, Paul Tarantino on clarinet and sax, and John Beron on drums, with vocalists Erasmo “Orazio” Aiello and David Marzetti.

Mike Marotta Jr., a Monterey native, is the third generation of Marottas to entertain Monterey Peninsula audiences. For over 45 years, he has performed all styles of popular music on accordion and piano with the Marotta Band.

Dennis Murphy is the Co-Founder of the Dennis Murphy School of Music and is a 3-time GRAMMY Nominee with international Smooth Jazz Artist Acoustic Alchemy. Since the mid-eighties, Dennis has been touring worldwide with various national and international artists. He recorded or played with Greg Kihn Band, Maria Muldaur, Billy Preston, Coasters, Drifters, Shirelles, and Kenny Rankin among others. Dennis appeared on National Prime Time Television and Nationally Syndicated Radio. His band was voted "Best of" 7 Consecutive Years by Monterey County Weekly Reader’s Poll.

Erasmo ‘Orazio’ Aiello comes from Palermo, Sicily. He has been discovered by musicians eager to share his gift of singing traditional Italian songs and opera with wider audiences. During the day he practices while baking bread at his famous Palermo Bakery.

This is the 28th year that David Marzetti has emceed and performed at Festa Italia with his close friend, Mike Marotta. David comes from a radio background that spans over 40 years. He currently hosts a radio show every Saturday morning called the “Shag Bag” on 1460 AM/101 FM KION, as well as Sundays with Sinatra: Live from Old Fisherman’s Wharf on KMBY 1240 AM/95.9 FM every Sunday morning. David spent many years working at the Monterey County Convention & Visitors Bureau promoting the region. He is highly regarded as “Monterey’s Emcee” and hosts many local functions and fundraisers including Festa Italia, Santa Rosalia Queen’s Coronation Ball, La Merienda, the City of Monterey’s Annual Birthday Celebration, Old Fisherman’s Wharf’s Annual Birthday Party, and the Italian Heritage Society Awards Ceremony. David is the Winner of BEST TV/RADIO PERSONALITY in Monterey Herald Readers Poll. And the 3-time winner of the PGA Media Person of the Year Award.

The Tarantella Dancers perform on Saturday and Sunday at Festa Italia. No Italian wedding or celebration would be complete without the rhythmic song and dance of the Tarantella. It is considered by some to be the most popular of all of the Italian songs and it is even considered by many as the song of Italy. The dance is both lively and graceful, with light and quick steps mixed with passionate gestures. The Tarantella, originally an Italian folk dance of the lower-and middle-classes has been labeled as a dance to cure sickness. Legend states that between the 15th and 17th centuries, an epidemic of tarantism swept through the town of Taranto in southern Italy, as a result of being bit by the poisonous tarantula spider. The victim, which is referred to as the tarantata, once bitten, could fall into a trance that could only be cured by frenzied dancing. People would surround the victim while musicians would play mandolins, guitars and tambourines in search of the correct rhythm. Each bet would have a different effect on the tarantata causing various movements and gestures. Once the correct rhythm was found, it was almost certain that the tarantata was cured. The Tarantella Dancers of Monterey perform annually at Festa Italia and other cultural events.

Fronted by charismatic lead vocalist and harmonica player Zoe Alexander, The Money Band performs with a remarkable intensity and fire that garners new fans and critical acclaim wherever and whenever they play. Playing every style from country to funk to disco to classic rock, reggae, modern rock and pop, with songs from The Beatles, Elvis, Johnny Cash, Van Morrison, The Rolling Stones, Kid Rock, David Bowie, KC & The Sunshine Band, AC/DC, Bruno Mars, Maroon 5 and many more of your favorites, The Money Band is famous for having a packed dance floor all night long! The Money Band has shared the stage with many major acts including Steve Winwood, Journey, The Dixie Chicks, Kenny Chesney, Lynyrd Skynyrd, Dave Mason, Link Wray, The Stray Cats, The Byrds, Smash Mouth and many, many more. They have toured and performed all over the United States as well as internationally, with dates in the UK and Europe including England, The Netherlands, Italy, and France. Additionally, they have performed for weddings, private parties, nightclubs, yacht parties, and at some of the most prestigious hotels and venues both locally and around the world. These include The Lodge at Pebble Beach, Carmel Mission Ranch, The Lake Tahoe Ritz Carlton, The Monterey Peninsula Country Club, The Biltmore Phoenix, AZ, Hahn Vineyards, The Ford Models Mansion Party in Bel Air, The CA Rodeo, The Silverado Resort in Napa, Coconut Grove at the Santa Cruz Beach Boardwalk, The Peabody in Memphis, TN, The Montalvo Art Center and The Hotel Negresco in Nice, France, to name just a few.

Anthony "Nino" Lane was born as Antonino Pasquale Cotroneo in Hamilton, Ontario, Canada. Son of Giorgio Cotroneo of Santa Roberto, Reggio Di Calabria and Angelina Musitano of Deglia Nova, Reggio Di Calabria. At the young age of ten Nino began to perform with many bands in the Italian community. Singing mainly in Italian he was known as “the little Italian Singer” While in the Harmony Dance Band he was fortunate to open up for the Original "Ink Spots " and many other Nationally known headliners. At the Age of fourteen he decided to leave his Italian sound and begin his first rock Band "Double Vision" later to be called "Clear Cut" they went on to record three albums. The first one under A&M records produced by Daniel Lanios (U-2, Peter Gabriel, Bonnie Raitt”. The second recorded under the CBS label, produced by Bob Destocki (Fast Times at Richmont High, The Ides of March” and the final one on A & M Records. At the same time Anthony studied with Rosemary Burns-Gazarra (the wife of Ben Gazzara) in Toronto, Canada. She was a former opera singer (New York Met) who had studied Bell Canto in Italy and had developed a technique for singing pop music. She called it 'the mask' and had been teaching it for many years. Her former students include Bryan Adams, Corey Heart, Jeff Healey, Sebastion Bach (Skid Row) And James Labrie (Dream Theatre). This would later change Anthony's life. Throughout the 80"s Anthony was a part of a powerful musical team. To make it easier in the music business, Anthony changed his name to Lane (Plain Lane is what he would say!) After 14 years on the road working fifty weeks a year, Anthony came to Los Angeles trying to secure a major label. He had made his mark in L.A. but the music scene was beginning to change quickly. Anthony decided to move and open a Club in Monterey, Ca. named PLANET GEMINI which he ran successfully for 25 years. To keep Music alive, Nino purchased the Legendary FOX THEATER in Salinas, California where he brings major shows and events. Anthony decided to follow his heart and sing the music he once enjoyed - Classic Italian. A performance you will all enjoy!

The 831 ALLSTAR Band is exploding onto the Central Coast with their new powerful sound. From Earth, Wind & Fire – showcasing their powerful horn section - to Cumbia, Salsa and Santana=style music highlighting their amazing rhythm section – all members have years of experience under their belts. This band is hot! If you want to dance, well get ready! The 831 ALLSTAR Band is here.